Corie DuChateau is originally from Phoenix, Arizona. She received her Bachelor of Fine Arts in film and television production from University of Colorado and went on to work in television production for 10 years in Denver, Colorado. She worked on numerous series for HGTV, Food Network, Discovery Channel, TLC, DIY Network, The Weather Channel, and the National Parks Service.

Between 2012 and 2016, Corie worked on emerging video technology projects in Silicon Valley, in the areas of live video streaming and video walls. She was one of the first to personally film, produce and direct live streaming broadcasts for television and radio stations, education, weddings and events, and she and her team published a live video streaming app to the app stores before Facebook Live even existed! Corie moved to Puerto Vallarta in 2016… (read more) 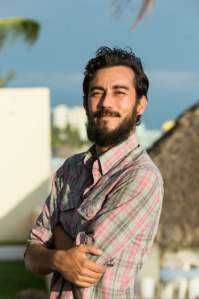 Ernesto Gallardo is from Guadalajara where he studied journalism and communications, and worked for the Guadalajara Film Festival for many years. In 2015 Ernesto moved to Puerto Vallarta to continue dedicating himself to photography here in paradise. View Ernesto’s portfolio on GuruShots where he has reached Champion level to see his street photography, and view his portfolio on MyWed to see his recent wedding photography.

What’s your favorite kind of photography?
Street photography. Journalism, architecture, landscape, moments. Street photography doesn’t necessarily mean an empty street. It’s a street with something. People, something happening, or sometimes an empty street that tells a story on its own. I love behind the scenes, documentary style photography, even in weddings. I love to catch the real moments. I don’t like photos to be too staged… (read more)